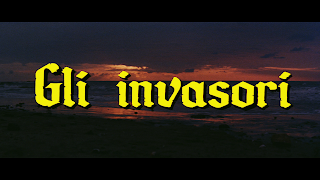 "In 786 AD, the invading Viking forces are repelled from the shores of England, leaving behind a young boy – Erik, son of the slain Viking king. Years later, Erik (George Ardisson, Juliet of the Spirits), raised by the English queen as her own, becomes Duke of Helford, while across the sea, his brother Eron (Cameron Mitchell, Blood and Black Lace) assumes leadership of the Viking horde and sets his sights on conquering England once again, setting the two estranged brothers on a collision course that will determine the fates of their respective kingdoms…" - synopsis provided by the distributor

Here’s the information provided about this release's transfer, "All restoration work was carried out at L'Immagine Ritrovata, Bologna. The original 35mm camera negative was scanned in 2K resolution on a pin- registered Arriscan and was graded on Digital vision's Nucoda Film Master. Thousands of instances of dirt, debris, scratches, picture instability and other instances of film wear were repaired or removed through a combination of digital restoration tools and techniques."

Erik the Conqueror comes on a 50 GB dual layer Blu-ray.

Colors look vibrant, details and black levels are solid, and grain fares well. That said, there are some mild issues related to compression.

This release comes with two audio options: a LPCM mono mix in Italian with optional English subtitles and a LPCM mono mix in English with optional English SDH subtitles. Both audio mixes sound clean, clear, and balanced throughout. With the Italian audio mixes, offering a slightly more robust presentation. It should be noted that the booklet that is included as part of this release mentions that the Italian audio mix was remastered from the optical sound track negatives and that the English audio mix was sourced from the best available masters.

Extras for this release include Erik the Conqueror’s original ending (1 minute 23 seconds, LPCM mono), a video essay by writer Michael Mackenzie that compares Erik the Conqueror and The Vikings titled Gli imitatori (12 minute 6 seconds, LPCM stereo English, no subtitles), an audio interview with actor Cameron Mitchell (63 minutes 23 seconds, LPCM mono English, no subtitles) and an informative audio commentary with Tim Lucas, author of Mario Bava – All the Colors of the Dark, reversible cover art and twenty-four page booklet with cast & crew information, an essay titled Swords and Sensationalism written by Kat Ellinger and information about the restoration.

Throughout his career, Mario Bava was a versatile director who worked in every genre. And though he is most known for his work in the horror genre, the majority of his earliest films as a director were in the sword and sandal sub-genre. Most notably, films like The Giant of Marathon and Hercules in the Haunted World.

Content-wise, besides being influenced by Richard Fleischer’s The Vikings, there are many elements in Erik the Conqueror that have since become synonymous with the Sword and Sandal sub-genre.

The narrative moves along at a breakneck pace. The action set pieces are well executed and sufficiently bloody. Another area where Erik the Conqueror excels is its visual effects.

The cast members all do well in their respective roles. With the standout performance being Cameron Mitchell (Blood and Black Lace, The Toolbox Murders) in the role of Eron, the son of a Norseman who was slain in battle by Anglo-Saxons, Other notable performances include George Ardisson (The Long Hair of Death) in the role of Erik, the long-lost brother of Eron, and Françoise Christophe (Fantomas vs. Scotland Yard) in the role of Regina Alice, the queen of the Anglo-Saxons.

Visually, Erik the Conqueror is a feast for the eyes. And there are many moments where the colors are filled with vibrancy. Standout moments visually include a scene where lovers are crucified and a scene where a tarantula is used to torture a young woman.

Erik the Conqueror gets a solid release from Arrow Video that comes with a strong audio/video presentation and a trio of insightful extras, highly recommended. 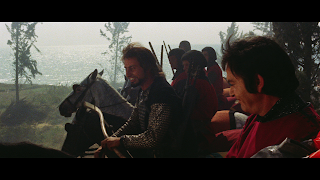 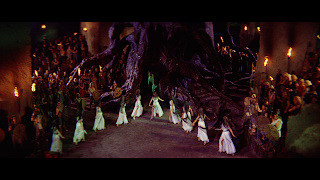 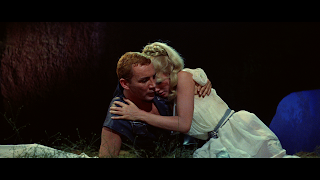 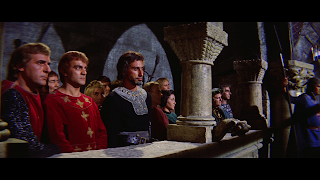 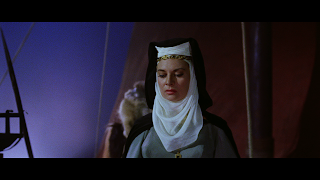 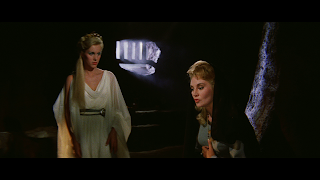 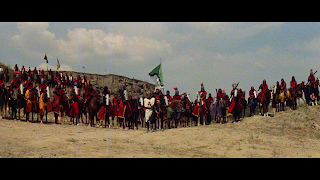 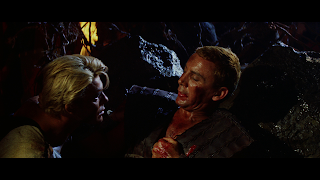